Black Friday weekend has begun! Click the banner to find all the greatest deals on registrations, premiums, and more!

Are you sure you want to close the chat?Chat will be closed and the chat history will be cleared.

Although you probably (or hopefully) know me as the person who writes Dynadot's awesome blog posts, I don't consider myself to be famous. But hey, don't write me off yet - I mean I can talk with music in the background just like many of the "singers" that are popular these days - look for my album out soon! I could also potentially get really good at rock climbing and become the next Chris Sharma (and if you don't know who that is, you should, so click here to educate yourself) - look for me on the next Climbing Magazine! Or...maybe not (I mean did you watch that video of Chris Sharma?), but even if I never become famous, I do own my domain name, robynnorgan.com, which unfortunately cannot be said for the potential US Secretary of Defense, Chuck Hagel.

Due to President Barack Obama's recent nomination of Chuck Hagel for US Secretary of Defense, Mr. Hagel has recently found himself thrust into the spotlight. As it turns out, he is a controversial choice with opposition coming from both sides of the political spectrum. But whether you think Hagel will be a amazing choice, a horrible choice, or you couldn't care less, you have to agree he's definitely made one big mistake in his career: allowing someone else, in his case an rather anti-Hagel group, claim his domain name chuckhagel.com.

Visit the site and the first thing you'll see (as I write this anyway) is a large picture of Hagel's face next to the also quite large statement of "FOR SECRETARY OF DEFENSE CHUCK HAGEL IS NOT A RESPONSIBLE OPTION." The website header also features another picture of Hagel with "CHUCK HAGEL IS NOT A RESPONSIBLE OPTION." And in case you're wondering, I used all caps because that's what is on the website. That's right, what should have been his domain name, the place where he could have promoted himself, is literally yelling to the world that he should not be chosen for US Secretary of Defense.

Hagel really doesn't have an excuse for this domain name oversight. He has been in public office since 1997, serving first as a senator from his home state of Nebraska and more recently as Chairperson of the President's Intelligence Advisory Board. He is 66, which is about my dad's age (see earlier post about Finding Your Perfect Domain Name), but if my dad was in public office, particularly the US Senate and especially working for the President's Advisory Board, you can be sure I would've had him secure a domain name earlier (I say "a domain name" because my dad's name is actually already taken by a very, very famous singer).

So now the question is what can Hagel do about this site? There are options out there - specifically he can file a Uniform Domain Name Dispute Resolution (UDRP) with ICANN, the nonprofit group that manages the Internet. However, in Hagel's case, the damage has already been done, and even if he wins his UDRP case, cases usually take at least 2-3 months to resolve. By that time, he will either be the US Secretary of Defense or not.

The moral of the story is that you should really consider owning your domain name. It's not just for famous people or people who are trying to become famous (though obviously they should definitely own their domain name), owning your domain name gives you the ability to brand yourself online the way you want to be branded. Even if you don't want to create a website, you can choose to forward your domain to your LinkedIn page, Google+ page, Twitter page, About Me page, or any other page or site you want.

Is your name already registered in the TLD you want? Consider other options, such as using your full name, initials, first initial/last name, or other such combinations. You could even add your specialty at the end such as "yournamelaw" or "chefyourname." Then once you've found the domain that's right for you, you can rest easy knowing that when you get famous, you'll already have your, shall we say, "ducks in a row" (see picture above). 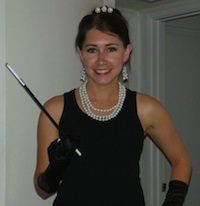 This post was written by Robyn Norgan, who isn't famous, but did once dress up as Audrey Hepburn's famous Breakfast at Tiffany's character Holly Golightly.