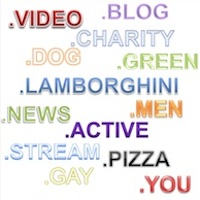 ICANN: The Next Big .thing: New Top-Level Domains from ICANN on FORA.tv

*If the video above does not show or play for you, please click here to view it.

Today, the list of proposed new gTLDs was officially released by ICANN, the Internet Corporation for Assigned Names and Numbers, a nonprofit group that has managed the global Internet's system of unique identifiers since 1998. The much anticipated list includes gTDLs such as .ACTIVE, .DOG, .GAY, .GREEN, .LAMBORGHINI, .MEN, .NEWS, .PIZZA, .STREAM, .VIDEO, .YOU, and many, many more. See the full list of new gTLDs.

But don't get too excited yet, there is a slow, complicated process ahead before any gTLDs are released to be officially registered by the public. According to ICANN, the first new domains will go live in early 2013, but "early" is vague and it looks like April or May of 2013 might actually be the soonest we'll see any new domains.

Now that the list of gTLDs has been revealed anyone can submit comments to be considered by the evaluation panels. If you would like to do so, you can submit your comments on ICANN's comments forum during the next 60 days. You can also comment on the new gTLD program through ICANN's Program Feedback forum. This will be open until the end of the first round. Finally, you can also submit formal objections to any of the new gTLD applications. You have seven months to file a formal objection and you get more information about how to do so from ICANN's Objection and Dispute Resolution page on their website.

Starting in July, the evaluation panels will begin the initial evaluation. They will be looking at whether the TLD string is too similar to another TLD, whether it meets technical requirements, and whether it is a geographic name. The organizations behind the application of those TLDs will also be scrutinized to ensure they have the appropriate technical, operational, and financial capabilities to run a registry.

So far, the process has already run into delays – the original reveal date was planned for April 30. On April 12 ICANN took its application system offline due to a glitch that allowed some users to see other applicants data. This was meant to be the final day of submission, but since ICANN's system problems persisted for weeks, they reopened the application system on May 21 and extended the deadline to May 30. Now ICANN has 1900 new gTLD possibilities to sift through before any can be released to be registered.

This post was written by Robyn Norgan, who is most excited about .NINJA and .LOL! Tell us what proposed gTLDs you'd most like to see pass the application process in the comments below.
Comment

Black Friday & Cyber Monday 2020 Sales!How to Build Trust With eCommerce Buyers This Holiday SeasonHow To Market Your Small Business Without Breaking The BankTake your student recruiting and retention to the top of the class with a .College domain name.Asia is Releasing 2-Character and 3&4-Numeric Premium Domains

Domain Unavailable: What to do if your desired name is taken10 Effective Email Marketing Tips Every Small Online Business Should Follow In 2020 And Beyond5 Handy Tips To Make Your Business Idea A Success During An Economic CrisisOur Black Friday deals are hereBlack Friday & Cyber Monday 2020 Sales!
Dynadot
Domains
Resources
Websites
Follow
Top Level Domains
Country Domains