We are currently experiencing delays in our order processing. Our team is working diligently on getting things back up to speed. Please know you will receive an email to confirm when your order has completed. 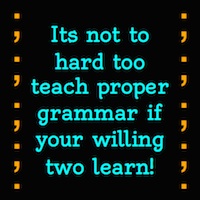 When you spend any amount of time on the various social media platforms, you may (and should) notice the many spelling and grammar mistakes people often make. Personally, I try to use the best spelling and grammar I can (obviously with Twitter you sometimes need to adjust for space) both for my personal accounts and especially for Dynadot's accounts. As a business, it is very important not to fall into using bad grammar and spelling online whether it's on social media or (and especially) on your website. Now I know it can sometimes be difficult, but you should still try to avoid these mistakes:

I think this is one of the most common mistakes I see around the Internet. It may save you two characters to use "your," but it's worth using up those two characters if "you're" is actually correct. "You're" is the contraction of "you are," as in "you are getting the use of 'your' and 'you're' wrong." "Your" is a possessive pronoun, as in "your Twitter account." The best way I've found to make sure you're using the correct word is to try your sentence with "you are" and see if it still makes sense. So, did I use "your" correctly in the image above?

Now, I will admit "its" and "it's" are one of the more confusing combinations of words in the English language. This is because normally an apostrophe is used to show possession of something; for example, "the woman's blog." In this case, "its" without an apostrophe is correct when used as a possessive pronoun (other possessive pronouns that don't require an apostrophe include yours, his, hers, ours, and theirs). "It's" is actually only used to represent the contraction of "it is." An easy way to check if you have the correct word is by trying your sentence with "it is" and seeing if it still makes sense. So, should the "its" in the image have an apostrophe?

Well, hopefully most of us know that "two" represents the number 2, but hey, I threw it in here anyway just in case. "Too" can mean additionally or excessively, as in "this blog is too long." You can replace the word "too" with "excessively" and the sentence still makes sense. "To" is a preposition that is used for expressing motion, time, and more. An example of the correct use of "to" is, "go to work." So, should I switch "to" and "too" in the image above?

Let me make it easy for you: "alot" is not a word. As a result, "alot" is never correct. Unlike all of these other possible grammar mistakes where there is a correct usage for the other similarly confusing word(s), "alot" simply doesn't exist in the English language. Yes, I know that using "alot" instead of the correct "a lot" saves you a character on Twitter, but don't...just don't.

I know, I know - most of you are simply using "were" in place of "we're" because you're too lazy to add the apostrophe. I catch myself doing the same thing sometimes (especially via text, though sometimes autocorrect fixes it for me). However, you really should take the time to add in the apostrophe when you are trying to say "we are," since "we're" is its contraction. "Were" is a past tense verb, as in "you were writing a blog yesterday" and "where" refers to a place; for example, "where do you live?" To check your grammar, first ask yourself if you're referring to a place. If not, remove that "h" and then try your sentence using "we are" to see if it still makes sense.

There, there, we've all made grammar mistakes with these three. Similarly to "where," "there" refers to a place, as in "I've heard San Francisco is a great city; let's go there!" "Their" is possessive, as in "That is their blog" and "they're" is the contraction of "they are." You can use the same sort of advice I suggested for "where-were-we're" to check your use of these three words: if it's not referring to a place, remove the "h" and then try saying your sentence using "they are" to see if it still makes sense.

Okay, so we don't have any easy-to-test contractions to check our use of these two words. "Then" indicates time, while "than" is used to compare two things. For example, "this blog is better than that blog." An example of "then" would be "I'm going to work, then home." The easiest way to check which of these words is correct in your sentence is to ask yourself if the sentence is referring to a point in time.

When asked how we're doing, most of us answer with "good." Well, good news everyone! Answering with "I'm good" is actually perfectly acceptable to say. In fact, saying "I'm well" tends to be used more to describe someone's health, not how their day is going. For other uses of "good" vs. "well," the best way to know which to use is by looking at the verb in the sentence. If the sentence uses a linking verb such as "is," which is used to link words in the sentence, "good" is the correct word to use. If the sentence uses an action verb such as "run" it is better to use "well." For example, "the banana is good" vs. "she runs well."

Aw, the dreaded number 13. I'm not normally scared of the number 13, but I am scared of these two: affect vs. effect. Even though I consider myself to be a grammar and spelling nerd, I cannot for the life me ever remember the difference between these two. Seriously, I have to look it up EVERY time I need to use one of them (or I just rearrange the sentence). To put it plainly, "affect" is a verb and "effect" is mostly used as a noun. Now, I don't know about you, but that certainly doesn't clear it up for me - I need some examples, so let's break it down. "Affect" means to influence, as in "this blog has affected my grammar." "Effect" refers to a result, as in "this blog's effect on my grammar has been positive." I guess the easiest way to remember is by looking at whether or not you're using the word as a verb in your sentence. If you are, then it's "affect," if you aren't then it's "effect."

Semicolons are actually pretty easy to use properly once you learn what they're supposed to do. Their role in a sentence is to join what could be two sentences into one sentence. For example, "I read this blog; I thought it was good." As you can see, the semicolon splits two sections of one sentence, but taken on their own, each section can also be their own independent sentence.

Commas have lots of different uses - including saving lives! Commas are used to separate elements in a series (she ate cheese, fruit, and bread), separate adjectives that are interchangeable (she is a young, beautiful woman), connect two or more parts of a sentence (she went home, but couldn't find her keys), after certain words (why, yes that is correct), and to set off names (happy birthday, grandma). Now you can see where commas can save lives using the first use mentioned above and the last use mentioned above. For example, you've probably seen this one around the Internet: "let's eat grandma" instead of the correct "let's eat, grandma." You probably also heard of this funny quote from chef Rachel Ray who said that she "finds inspiration in cooking her family and her dog." This quote appeared on the magazine Tails, though according to them it was photoshopped and was not actually missing that ever-important comma.

One other thing I'd like to mention is the often forgotten Oxford comma. You may have noticed that I used it in my example above, "she ate cheese, fruit, and bread." The Oxford comma is the one that comes before the final "and" and it is often left off. Although I have heard people go back and forth on whether using it is necessary, I maintain that it is. That is because of sentences like this: "she ate cheese and crackers, fruit, and bread." You'll notice I put cheese and crackers together and that is because they go together in the series. If I leave off the Oxford comma, you may assume that the fruit and bread go together in the same way, when they don't.

I think many people have trouble remembering when to use an apostrophe when there is an "s" at the end of a word. Apostrophes are used to show possession (as we mentioned in the "its vs. it's" section above, where you should remember it's not used for possessive pronouns). An example of this is "Robyn's blog post." Since you're referring to my blog post, I am the owner of it and that is why my name is written with an apostrophe "s." If you're simply referring to multiple things such as "I have written many blog posts," you don't need an apostrophe. Now you may still be wondering when to use apostrophe "s" vs. "s" apostrophe. Simply ending a word with an apostrophe is used to make a plural noun that already ends in "s" possessive. For example, "the girls' pen" or "the Jones' house."

Hopefully we all also know that apostrophes are also used in contractions (though sometimes I wonder when I read things around the Internet). Contractions are shortened forms of words or groups of words. For example, "I'm" is the contraction of "I am" and "don't" is the contraction of "do not." The apostrophe is used to replace the missing letters - in the cases above that would "a" and "o." I know it's easy to leave out, but let's be honest - "dont" and cant" are not real words without their apostrophes.

Now get out there and use your newfound grammar knowledge to make the world a better place. After all, commas save lives! 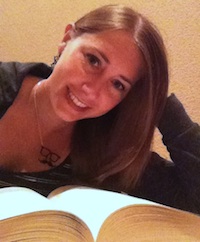 This post was written by Robyn Norgan, who wants to remind you that while commas save lives, correct spelling saves embarrassment. Seriously, if you want to tell the world how good someone's cologne smells, please remember the "g" and the "e"!

P.S. Hopefully you've realized that the image above has five mistakes and should actually read, "It's not too hard to teach proper grammar if you're willing to learn"!
Comment

How to make your beauty brand stand out with .Beauty, .Hair, .Skin, and .Makeup domainsCelebrating 5 Years of .CLOUD: 2020 Premium Domains ReportCan a Website Have Multiple Domain Names?5 Ways To Turn A Dull Brand Into A Cool BrandHow To Leverage Quora To Build Your Brand

Domain Unavailable: What to do if your desired name is takenOur Website Builder-#TheDynadotDifference10 Effective Email Marketing Tips Every Small Online Business Should Follow In 2020 And Beyond5 Handy Tips To Make Your Business Idea A Success During An Economic CrisisCan You Change Your Domain Name? What To Consider
Dynadot
Domains
Resources
Websites
Follow
Top Level Domains
Country Domains