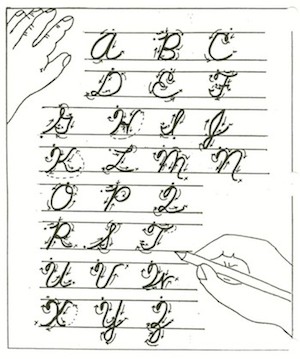 I hope you've got your writing utensils ready because today is National Handwriting Day! We celebrate today's very special holiday every year on January 23rd in conjunction with John Hancockâs birthday who was often remembered for his iconic signature on the Declaration of Independence. Let's commemorate the holiday with a look at how handwriting has evolved- and, some would say, declined- over the centuries.

During the United States's infancy, professional penmen were responsible for copying official documents, including the Declaration of Independence and the Constitution. Nowadays, information is mainly documented and transferred back and forth through keyboards and computer monitors which explains why the use of handwriting has declined over the past few years.

Although some may argue that technology has allowed for more time efficient means of communication, it does have it set backs. When comparing an e-mail and written letter, there's no arguing which of the two delivers a more personal message. I think we can all agree that a hand written letter requires a lot more time and effort and not to mention it costs more in the long run. But the simple fact that someone took time out of their day to sit down and write to you is a very lovely gesture that doesn't go unnoticed (or end up in your spam folder).

So step away from your keyboard, and put pen to paper for old times sake! It's the perfect day to get in touch with your creative skills and achieve the penmanship you've always wanted- or at least attempt to improve it. Whether it's through a handwritten note, poem, letter or journal entry- the lost art or handwriting is one of the many ways we can uniquely express ourselves.

Personalize Your Computer Font: If you're still a little skeptical about getting back into the rhythm of handwriting, myscriptfont.com let's you digitally produce documents with a personal touch again. All you need to do is fill out the template by hand and upload to your computer. This program is not only free, but it enables you to use your own handwriting as a font instead of every other generic writing style installed on your computer, so why not give it a shot!

Want more fun, crazy, and hilarious holidays? Keep up with us on Facebook, Twitter, and Google+ where we'll be posting often with the hashtag #HilariousHolidays

Our forums are the perfect place to ask questions related to domains and websites.

Keep up with Dynadot, get tips, info, awesome deals, and more on our blog.

Connect with a Dynadot guru for instant answers to your questions.