Black Friday is here! Find discounts on registrations, transfers, premium domains, and more starting as low as $0.60. Click the banner to see all specials. 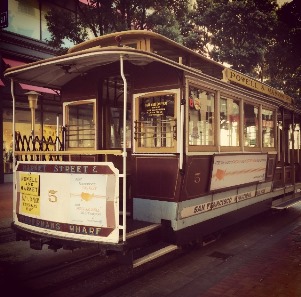 Cable Car Day is celebrated today because it was on January 17, 1871 that Andrew Smith Hallidie patented the first cable car. He got the idea while watching some horses struggle to pull a streetcar up one of San Francisco's famously steep hills. Eventually the horses slipped and were unfortunately dragged to their deaths right in front of him. After this Hallidie started Clay Street Hill Railway, the first cable car company. The company used his father's wire rope invention to pull streetcars up Clay Street and after its public debut on September 1, 1873 it was a big success.

Although there used to be many cable car lines running all over the city of San Francisco, today there are just three cable car lines: the Powell-Hyde Line, the Powell-Mason Line, and the California Street Line. Riding a cable car when you visit San Francisco is a fun way to experience the city. Yes, it's touristy, but hey if you're visiting the city, then you are a tourist! There is also a Cable Car Museum that you can check out, which houses a collection of historic cable cars.

Since our headquarters is located just south of San Francisco and I grew up just east of the city, I wanted to share a few tips for anyone planning to visit our fine city:

You may have heard the quote, "the coldest winter I ever spent was a summer in San Francisco." Many attribute this quote to Mark Twain, but whether or not he said this, the quote is something to consider. Although whoever said this quote obviously wasn't a part of the recent polar vortex gripping the rest of the US this winter, San Francisco's summers can be very cool. In fact, while the rest of the US was reeling from high temperatures over this past summer, San Francisco was one of the coldest places in the mainland US. You can always tell the tourists during the summer because they're wearing brand new San Francisco sweatshirts.

I should also mention that the surrounding area's weather can be vastly different from that of the city. Both in San Francisco itself and in the surrounding Bay Area, we have what are called microclimates, which means that if you're planning to also visit the Napa Valley for some wine, you will need those summer clothes!

2. Watch out for big events

It seems like San Francisco always has big events going on. Many of these events can completely bog down the city and make hotel prices skyrocket. If you're planning a trip, try and check out the city's events calendar first. The city is already expensive, but there's no reason to pay more because of an event you aren't even attending. One good place to find upcoming events in the city is SanFrancisco.travel.

3. Plan ahead if you want to visit Alcatraz

Alcatraz Island is one of San Francisco's biggest attractions - and for good reason - it's a really cool place to see. No matter when you're planning to visit the city, I recommend getting your tickets in advance. I tried to go on a random Monday in April once and it was already sold out for the day. This wasn't a big deal for me since I'm local, but if this is your one trip to San Francisco and Alcatraz is on your must-see list, plan ahead and get your tickets well in advance.

Want more fun, crazy, and hilarious holidays? Keep up with us on Facebook, Twitter, and Google+ where we'll be posting often with the hashtag #HilariousHolidays

Our forums are the perfect place to ask questions related to domains and websites.

Keep up with Dynadot, get tips, info, awesome deals, and more on our blog.

Connect with a Dynadot guru for instant answers to your questions.